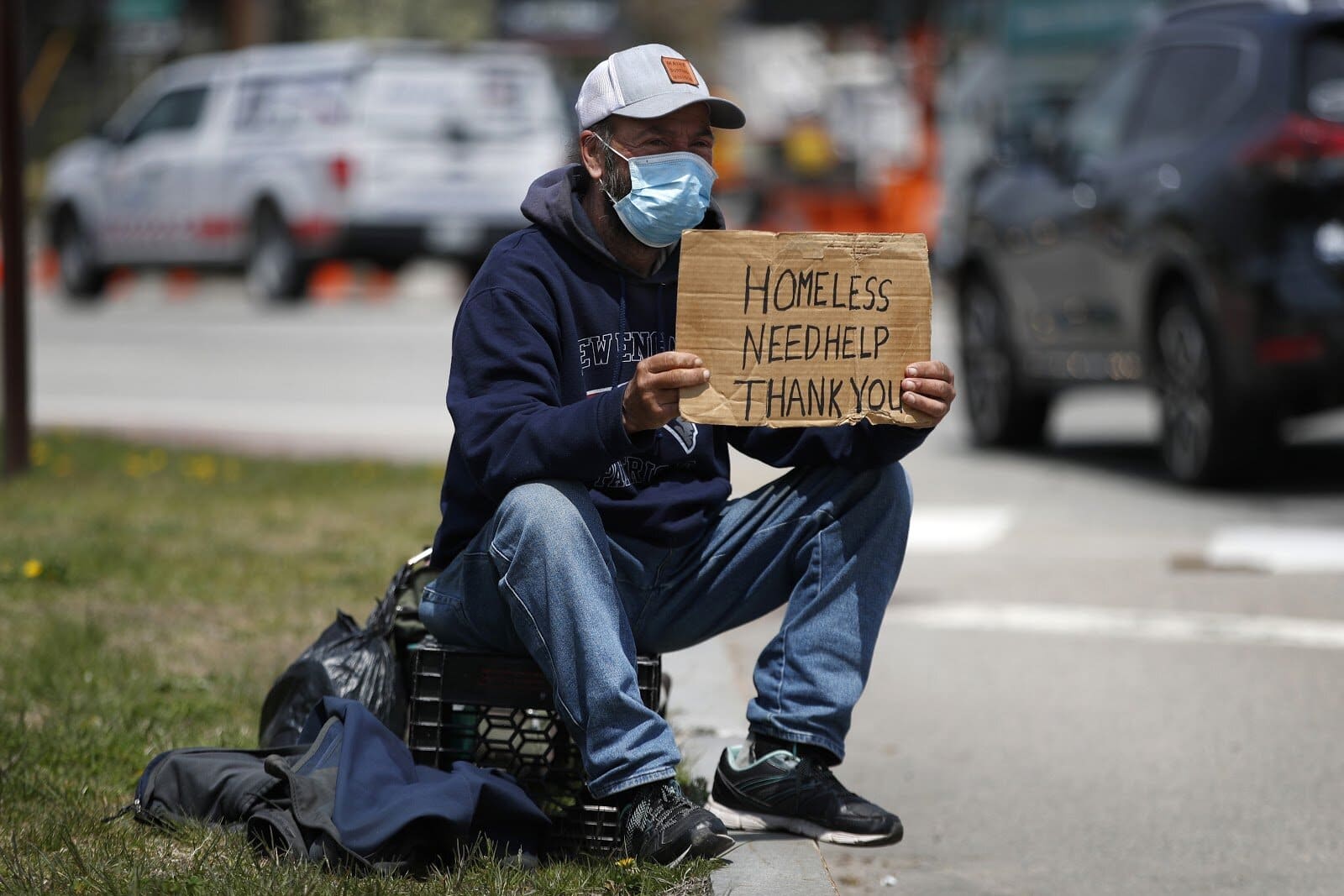 Homelessness in the Age of Staying Home

I’ve wanted to write about homelessness for the past year, but I’ve been too afraid. I was worried I would say something wrong and that I wouldn’t have anything to add to the conversation. But my urge to learn more persisted.

To be unsheltered, hungry and without health services in the region of the world that has generated more wealth than any other is morally wrong. Billions of dollars virtually zoom through underground fiber-optic cables while thousands of people struggle to meet basic needs, and thousands more live one unexpected event away from being forced onto the streets.

Once the pandemic hit, I became increasingly concerned about homelessness. I watched governments spring into action with initiatives like Governor Newsom’s Project Roomkey—an effort to rent hotel rooms to provide housing for the unsheltered. I read that the number of tents in San Francisco’s Tenderloin district had increased 285% since January. I wondered what it felt like to live through stay-at-home orders when you don’t have a home.

I figured that the best way to get an accurate perspective would be to speak with people experiencing homelessness on the ground and to listen to their stories. After weeks of procrastinating, I worked up the nerve to drive to Guadalupe River Park in San Jose. I spotted a few tents and drove toward them.

As I got closer, more and more clusters of tents became visible. The streets were dotted with vehicles sheltering people inside. There were several people pushing overflowing shopping carts and others resting on the side of the road. I’d been in this area before, but there were at least twice as many tents, cars and people as I remembered from before.

I pulled into a parking lot and sat in my car, full trepidation mode. I felt horrible, frozen. Like an outsider, an intruder, an imposter. My plan to ask a few open-ended questions flew out the window. There was no chance I was getting out of the car.

I also felt bad that I felt bad. I thought, We’re all humans, what’s the big deal? I should have had the courage to say hello to someone. Nothing in this scene should have been surprising to me. I knew that homelessness existed. I knew that the pandemic has been hitting low-income and minority groups the hardest, both medically and economically. But knowing and seeing are different.

I pulled out of the parking lot and drove home, angry and sad. I felt guilty that I have multiple part-time jobs, that I have plenty of food and that I have had the luxury of spending the shelter-in-place sheltered from others’ suffering. I felt a sense of disconnection and otherness—like the car had been a barrier between my humanity and the humanity of those experiencing homelessness. I felt powerless to do anything, and thought my interview attempt would have been unwelcome and unhelpful.

Although I know that having conversations would have been a valuable experience, my failed attempt felt genuine. I was confronted with my privilege and comfort, and reminded just how real and widespread of an issue homelessness really is. It’s easy to discuss three-point solutions while forgetting that homelessness is about human rights and dignity. The people in the tents by the park and I share a common humanity.

But the needs of this community are evident, and I am in a unique position to advocate and help. But what can I do?

A thought-provoking and blunt article was published last fall in City Journal, titled, “San Francisco, Hostage to the Homeless.” Writer Heather Mac Donald’s thesis states a “failure to enforce basic standards of public behavior has made one of America’s great cities increasingly unlivable.”

She cites data on how, despite massive amounts of funding going into affordable housing and homeless services, the homeless population is dramatically increasing in San Francisco. Numbers are up 17% from 2017 to 2019 (San Jose saw a similar increase). Mac Donald argues that San Francisco should invest less on shelters in expensive neighborhoods and more on facilities for treating mental illness in locations where taxpayer money can be used more efficiently. She criticizes San Francisco for normalizing and tolerating the rampant drug trade, recklessness and abuse that violate baseline societal norms. Above all, she believes that “the rule of law does not have an income threshold; its application should be universal.”

I struggled reading this because I felt that it failed to acknowledge the complexity of homelessness and the humanity of unsheltered populations. It failed to acknowledge the hard-working nonprofits and government agencies providing essential services grounded in evidence-based approaches. And it falsely stereotyped all unhoused individuals as addicted, mentally ill and lawless. In reality, many do not fall under these categories.

But I think many of Mac Donald’s points still stand. All residents of a city deserve to feel safe, and that means enforcing laws on what actions are permitted. Allowing widespread drug trafficking should not be the compassionate policy choice. Some homeless individuals may prefer the freedom of a life unhoused over accepting services that require them to make certain lifestyle changes.

The article left me with a question: is it possible for a city to take a firm stance against unlawful behavior while also providing essential services, opportunities, and compassion to people experiencing homelessness?

Between 2007-2012, Santa Clara County conducted the most comprehensive survey in the nation on the costs of homelessness. The survey found that about five percent of the unhoused population accounted for 47 percent of total costs, amounting to over $100,000 per individual per year in health care, social services and criminal justice expenses. In addition to being the right thing to do, focusing efforts to house these individuals can lead to massive public savings, which is good for all social service efforts in the end.

To test this theory, the county implemented a campaign called “Housing 1000” to measure the effects of housing individuals. The initiative provided housing to 850 people over three years and found that 83 percent remained stably housed. For those that remained housed, the cost to the county decreased from over $60,000 to under $20,000—an enormous reduction. The success of this program led to the formal adoption of the Housing First approach, which prioritizes providing stable housing, then layering on social services to meet individual needs.

This approach informed Santa Clara County’s “Community Plan to End Homelessness” which extends from 2015-2020. The plan admirably focuses on both systematic and individualized solutions. The program has brought once-separate government agencies and plans into unity, and clearly defined targets for helping individuals and building housing for the future. As of the end of 2019, 14,132 individuals received housing, and 96 percent of those individuals remained stably housed for at least 12 months.

Is the plan working? I was blown away by the comprehensive, data-driven, and innovative way Santa Clara County is working to address homelessness. But the number of people experiencing homelessness is still growing. Between 2007-2017, the county’s homeless population hovered around 7,000. In 2019, it jumped to 9,700. This was before the pandemic. I worry that the January 2021 data will be much worse.

Three days before the shelter-in-place went into effect, I spoke with Heather Bucy, the Director of Santa Clara County Shelters & Services at LifeMoves, a nonprofit dedicated to finding solutions to homelessness in Silicon Valley. LifeMoves operates 23 shelter locations from Daly City to San Jose, and provides essential services, case management and community outreach.

Bucy told me that LifeMoves programs successfully return 90 percent of families and 45 percent of individuals to stable, long-term housing. Contrasting Mac Donald’s article, Bucy listed several common misconceptions people hold about people experiencing homelessness: “That they’re all mentally ill, that they’re all addicted to drugs, that they’re lazy, that it’s truly their fault. In our programs, people are always shocked how many people are working two or three jobs.”

LifeMoves plays a role in developing the county’s next five-year plan for 2020 and beyond, and Bucy told me that their committee was getting more community buy-in than ever before. I learned that nonprofits are working with the City of San Jose to install toilets and start trash pickups in encampments. Bucy also described a new safe parking program that LifeMoves has initiated along with the city. “Individuals living in vehicles can safely park in a city-owned lot. We provide food and services including case management. So it’s a bridge. Community members are more open to that.”

Programs like this one often face criticism from community members about safety and cost. But I was impressed that LifeMoves is working with the city to find innovative ways to serve unhoused clients. Silicon Valley takes pride in its innovative problem-solving spirit and its approach to homelessness should follow suit.

I was confronted with this reality after my confusing and discouraging interview attempt in San Jose. Before thinking about solutions, I needed to reimagine my viewpoint and perception.

Heather Bucy also touched on the deeper way we perceive people experiencing homelessness. “We like to fill in the blank with whatever our comfort level is. We define people not by who they are, but by where we see them. Then we put all these assumptions on them.”

Homelessness is a symptom of a much deeper problem of disconnection, a fracture in the web of our local community. To solve homelessness, we first must see all people, regardless of their appearance or situation, with eyes and hearts of reverence—reverence for the burdens they carry, reverence for their resilience, reverence just because they’re human. People need housing, and people also need to be seen and heard.

As the pandemic rapidly expands the unsheltered population, we must both work toward tangible solutions and guard against seeing those without homes as “other” or “different.” The pandemic is exactly the type of bad break that often causes homelessness in the first place. But the dedicated work of local government and nonprofits can hopefully house people who find themselves on the streets as quickly as possible. Local organizations like HomeFirst, Second Harvest Food Bank, and LifeMoves are doing incredible work and facing additional financial challenges during the pandemic. They need our help.

It can feel overwhelming to simply exist right now, even without the complexity of considering those who are experiencing more difficult circumstances than our own. With many traditional ways to serve others now removed, giving money is one of the only ways to help. Not everyone may be able to donate based on their own financial situation at the moment, but we can all strive to remember that all members of our community carry equal dignity—housing or not.

Homelessness is solvable. We know why it happens, and we know the steps we need to take. We have the resources and the heart. We need to celebrate and emulate the great work currently being done and rise to the growing challenges.