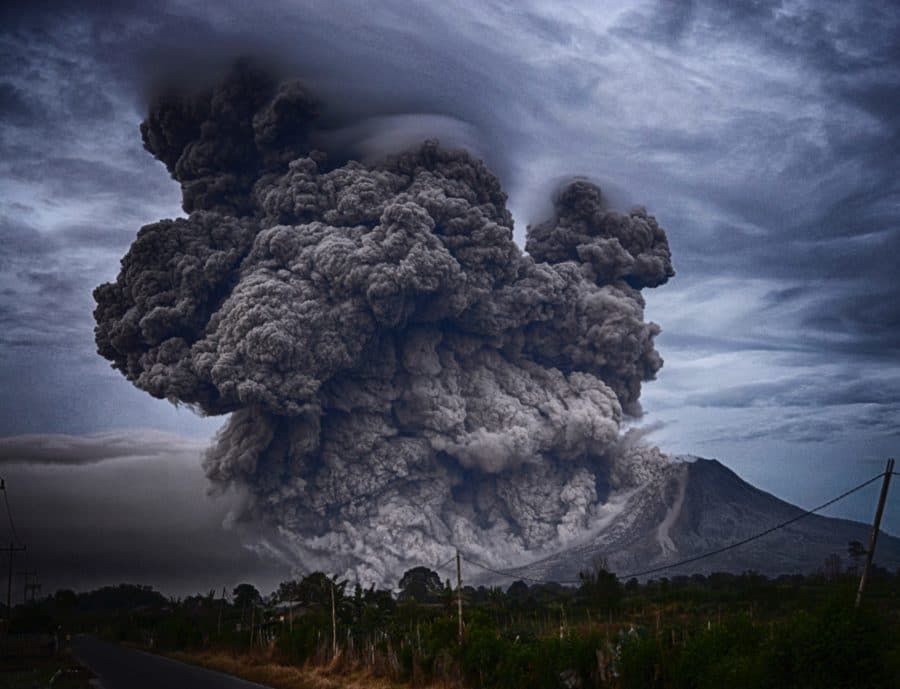 A Fresh Take on the End of Humankind

The recent coronavirus outbreak has sparked international fears over a global pandemic. Although U.S. citizens have little reason to worry, the effect of the disease on global markets shows just how fragile and intertwined our world has become. Statistically, the coronavirus is a mere blip on the radar in terms of the death count. So far, 560 deaths have been reported worldwide, compared with almost 80,000 flu deaths during the 2017-2018 season.

But the coronavirus brings a worrisome question to the forefront: How might the human species end?

Certainly, a global disease pandemic could do it. Just 100 years ago, the Spanish flu killed 50 million people worldwide—one out of every 20 humans alive at the time. We have made enormous progress in vaccines and antibiotics in the past century, but the risk of a pandemic remains. The World Health Organization warned that a comparable virus today could spread across the globe in 36 hours, bolstered by air travel. But as the technology to heal has advanced, so has the technology to harm. In addition to natural outbreaks, we shouldn’t discount bioterrorism: the intentional spreading of bacteria or viruses with the intent to harm or kill.

The Dow Jones industrial average dropped two percent on Jan. 31 over fears of coronavirus, its worst day in five months. If that’s the impact that such a relatively small outbreak can have on the economy, imagine what a pandemic killing tens of millions could do to shut down the economy and create chaos.

A second possibility for the demise of humanity would be a nuclear war. An all-out nuclear battle between any nuclear-equipped nation would immediately kill many millions, but the impacts would extend farther than the craters left by warheads.

Nuclear weapons would cause massive firestorms in the cities they hit, sending tons of smoke and chemicals into the atmosphere. The resulting smoke clouds would cause temperatures to drop for decades in a so-called “nuclear winter.”

The American Geophysical Union, a large non-profit supporting Earth and space science, reported that even a relatively small nuclear war between India and Pakistan could eliminate 20-50 percent of the local ozone layer and send temperatures there colder than they’ve been for 1,000 years.

Nuclear war is a worrying prospect because the power to use the world’s largest stockpile of nuclear weapons rests in the hands of one man: the U.S. president. Previous presidents have admitted to nearly detonating nuclear weapons, and human error or impulse could ignite a global conflict.

The least sudden and most concerning existential threat to humanity is climate change. While destruction by nuclear weapons would be immediate, a slowly warming climate will cause prolonged malnutrition, sea-level rise, natural disasters, water scarcity and displacement.

Although the risk of humans going extinct anytime soon is extremely low, millions of animal species could go extinct, and over a billion humans could suffer.

While the wealthy will remain sheltered from the worst of the consequences, poor people living in dry areas or coastal cities will face the worst effects. The disease and war doomsday scenarios would require active decisions or bad luck, but the only input climate change needs to affect humanity is complacence.

Climate models debate the likelihood of various temperature rise scenarios, but none can predict whether our climate crisis will unite humanity around a common mission or spur division and unrest.

A global pandemic, nuclear war and climate change seem like the most likely apocalyptic events, but the curious mind can find other causes for concern. Aliens could invade. An asteroid could hit the earth. A supervolcano could explode. We could create artificial intelligence that turns evil or ends up killing humans as a side-effect of another goal. Over 99 percent of species ever to exist are extinct. One day, humans may face the same fate.

So should you be worried about an end to humanity? Nope.

Besides getting your flu shot, voting for a mentally stable president and doing your part to reduce carbon emissions, you can’t control any of these scenarios. So why worry?

There’s something strangely attractive about imagining apocalyptic scenarios; these scenes make perfect material for popular movies and books. As civilization lies on the brink of collapse, a hero comes in to save the day. We like to romanticize a dramatic end to our existence.

The fact is, your life will almost certainly end in a quite boring manner, independent of human extinction. As a 20-year-old, you’re much more likely to die in a car accident or from alcohol consumption than from nuclear war or disease pandemic.

Imagining how humanity will end can be enjoyable in a dark way, but these scenarios are unlikely to pass within any of our lifetimes. The world is safer today than ever before in human history. But please, buckle your seatbelt.