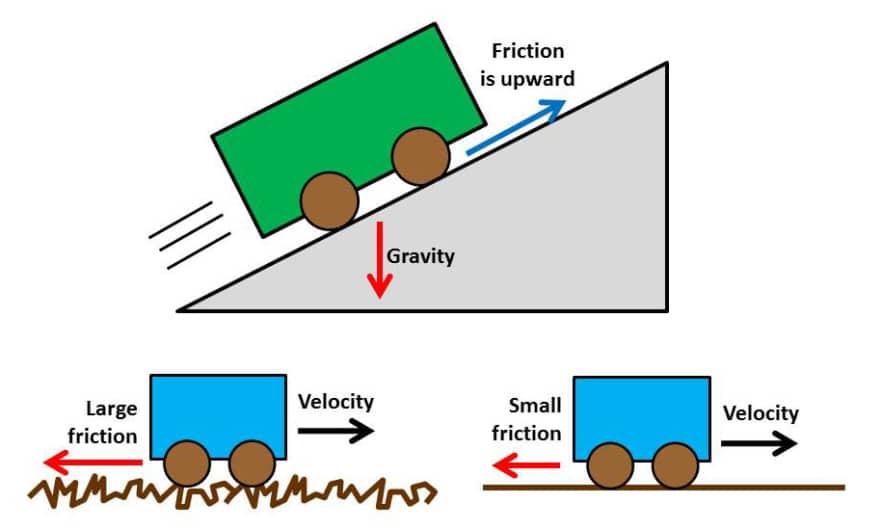 After a year of high school AP Physics, I couldn’t help but notice some similarities between physics and design thinking. One of my favorite ways to get inspired is to connect seemingly unrelated ideas, so I’ve compiled a list of physics topics and applied them to the design thinking process. Enjoy!

Without friction, you wouldn’t even be able to walk across the room, much less drive a car or ride a bike. However, too much friction can make it difficult to move. Similarly, constraints are incredibly useful when developing ideas. Although it may seem counter-intuitive, more narrow questions often yield a greater number and range of ideas than wide-open questions. It is important to find the right balance of constraints in order to encourage but not limit ideas.

Stationary objects high off the ground have lots of potential gravitational energy, but no motion, or kinetic energy. After a brainstorm, you may have dozens and dozens of ideas floating around. These ideas have enormous potential, but right now, they are just potential. You need to convert this energy into kinetic energy by giving the ideas velocity and turning them into actionable prototypes. The transition from ideas to concrete prototypes is one of the most difficult and vital parts of the design thinking process.

When two objects collide and stick together, it is called an inelastic collision. If the objects were moving in similar directions, they will now move together with even more speed than either had by itself before the collision. Similarly, sharing and mixing ideas can give them even more speed and potential for impact than they ever could have achieved alone. Calling ideas “new” is a bit misleading; all ideas are really just collisions between past experience and previous ideas.

The amount of inertia an object has depends on its mass. The more massive the object, the harder it is to get it to change speeds or move in a new direction. This idea has manifested itself in our modern society as small and agile start-ups have overtaken large and bureaucratic organizations. When prototyping an idea, it is crucial to start small and get feedback in the real world before you go big.

Circles and cycles play a big part in design thinking; you could argue that the whole process is one big cycle. More specifically, the cycle of prototyping, testing and learning is necessary to validate your ideas. At any point along its path, an object moving in a circle has velocity pointing straight ahead, but has acceleration pointing towards the center of the circle. When designing, it is important to constantly be pivoting, moving and learning, all while keeping the center goal and purpose at the forefront of your decisions.

An object in equilibrium must be feeling equal torque, which is a combination of a force and a distance from a pivot point. Equilibrium, or balance, is critical to many stages of the design thinking process. It is important for design researchers to consider both human stories and larger data trends. It is important for new products to balance ergonomics, price and usefulness. Another interesting note is that forces applied far away from the pivot point have more torque than forces applied close to the pivot point. Backing away from a problem can often accomplish more than zooming in.

Convergent and divergent lenses have the ability to either spread light out or bring it together. Similarly, both convergent and divergent thinking are necessary during different stages of the design thinking process. Divergent thinking is used during brainstorming, when teams think of as many ideas as possible and pull inspiration from a wide range of places. In the implementation phase, it is necessary to narrow down all of these ideas and converge on one concept to implement.

When a block of ice melts into liquid, then evaporates into steam, the temperature doesn’t increase at a constant rate. Instead, there are long periods where energy is put into the material, but no temperature change is achieved. During these phases, the energy is helping to break down bonds within atoms- a crucial but invisible process. The design thinking process is hardly linear, and long periods where seemingly nothing is accomplished are inevitable. Progress isn’t always visible, and important parts of the process may be long and tedious. However, once you put in enough energy, your ice block will be ready for the next phase.

When a wave, like sound or water, encounters a new medium, it changes direction based on the shape and material of that new medium. Similarly, when new ideas are implemented in the real world, they may behave very differently than previously hoped or expected. This often ends up turning out for the better, but it reinforces the importance of testing ideas in a range of environments.

French philosopher Blaise Pascal realized that the pressure (force per unit of area) applied to a confined fluid increases the pressure throughout the fluid by the same amount. This implies a very interesting thing: small inputs can yield big outputs. It’s possible for a small downward force on one end of a pressurized tube to generate enough pressure to lift a whole car on the other end. Sometimes small changes in products or services can make huge differences in the lives of the users of these ideas. It can be tempting to believe that design thinking should always produce radically new and different ideas, but sometimes this isn’t what is really needed.

In most areas of our lives, we naturally congregate with people that have similar looks, interests and passions as ours. However, in the design process, teams with diverse backgrounds and skills can be crucial to developing a wide range of ideas. Individually, we can take a lesson from every atom in our body and make an effort to seek out inspiration and skills from unfamiliar places.

Magnetic fields are weird. First off, a charged particle in a magnetic field won’t even feel the field around it unless it moves. When it does move, the particle will feel a force that is perpendicular to its motion, not in the direction of the field. It can be tempting to sit still with ideas, fearful of the way they will be directed by the world. Testing ideas can be uncomfortable and unexpected, but it is ultimately the only way to make progress.

Light has properties of both a particle and wave, a phenomena that should be impossible. Just because two conflicting ideas seem impossible to convene, doesn’t mean they are doomed to be separate. More work and less time? More human-centered and with more technology? It can be done. Embrace the “and.”